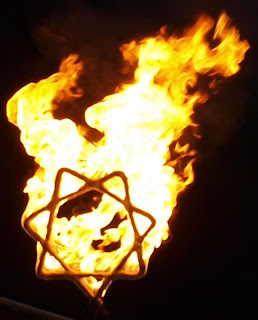 I have returned from the seventh annual Babalon Rising festival, although not entirely to consensus reality.  The real magic of the festival can be measured, imho, by the "everyone knows everyone else" kind of small-town experimental feel of the event.

Those that were at the festival know that I could never possibly cover everything that happened.  Even if I wanted to try, there was simply too much happening at the same time.  Therefore, I have decided this year to give a behind-the-scene look at the workings of the Feast of the Beast ritual, which I wrote and directed this year.

Here is the script...

Feast of the Beast
2012 Ritual

The Magician and stands facing the crowd. The HGA is hidden next to her under a black cloth. The Tree of Life BABALONS are off field in hiding.

HGA – (casts off cloth and stands facing the Magician. He holds the cup of BABALON.) I answer you, oh self of myself!

Magician – Assist me then to call forth the seven faces of BABALON!
Even now thy hour strikes upon the clock of my FATHER.
For He prepared a banquet and a Bridal Bed. BABALON was that Bride, appointed from the beginning, as it was written IO PAN!
Now is the hour of birth at hand.
Thy tears, thy sweat, thy blood, thy semen, thy love, thy faith shall provide.
I shall drain thee like the cup that is of BABALON. (The Magician and the HGA embrace and begin to chant:)

The BABALONS of the Tree of Life enter and are arranged in the pattern of the Sepheroth of the Tree on the field facing the Magician. The Magician and the HGA continue to chant as the BABALONS move into position. If the crowd is chanting along, the HGA now loudly calls for silence. The HGA takes the Magician by the hand and they walk to BABALON in Malkuth.

BABALON in Malkuth – I am the gate of Malkuth, the first face of BABALON. I offer forth this crown to you. (Malkuth removes her crown and places it into the cup. The Magician and the HGA walk over to Yesod.)

BABALON in Yesod – I am the gate of Yesod, the second face of BABALON. I offer forth these earrings to you. (Yesod removes her earrings and places them into the cup. The Magician and the HGA walk over to Hod.)

BABALON in Hod – I am the gate of Hod, the third face of BABALON. I offer forth this necklace to you. (Hod removes her necklace and places it into the cup. The Magician and the HGA walk over to Netzach.)

BABALON in Netzach – I am the gate of Netzach, the fourth face of BABALON. I offer forth these ornaments of the breast to you. (Netzach removes her breast ornaments and places them into the cup. The Magician and the HGA walk over to Tiphereth.)

BABALON in Tiphereth – I am the gate of Tiphereth, the fifth face of BABALON. I offer forth this girdle of birthstones to you. (Tiphereth removes her girdle and places it into the cup. The Magician and the HGA walk over to Gevurah.)

BABALON in Gevurah – I am the gate of Gevurah, the sixth face of BABALON. I offer forth these claps of the hands and feet to you. (Gevurah removes her claps and places them into the cup. The Magician and the HGA walk over to Chesed.)

Magician – Where is the seventh gate? Where is BABALON before the Abyss?

HGA – You are gate of Chesed, but first you must sacrifice to BABALON. (He bows before her and offers up the chalice.)

Magician - I am the gate of Chesed, the seventh face of BABALON. I offer forth this loincloth to you. (The Magician removes her loincloth and places it into the cup. The HGA rises and they embrace and kiss. She takes the cup and Magician proclaims:) I AM BABALON! (Everyone cheers) Soon we will enter the Abyss & our HGA will abandon us. (Gestures to her HGA. An assistant brings the Star of Babalon to the Magician and the HGA, together they light the Star.) Yet, there is no need to fear the Unknown ahead for soon we will be in the City of Pyramids and I WILL RISE! (More cheering. The Magician/BABALON takes the flaming Star around the fire for all to see. The BABALONS of the Tree of Life follow her parading in a circle with her. As the Magican/BABALON does this she proclaims:) Before we may enter the City of Pyramids we must abandon all things. Send your banishments into the effigy, that they may be consumed by fire! (As she finishes her circle, she thrusts the flaming Star into the wood pile, igniting the fire. More cheering.) Now go forth, and take your fill and Will of Love!

Not bad, if I do say so myself.   Now, what I had not expected was that the seven Babalons of the ritual, along with myself, would bond on such a fundamental level this year during rehearsal.  As vessels of Babalon at this ritual we have shared a special energy and sacred charge.  We have formed a kind of sisterhood.  One of the Babalons joked through tears that she was grateful for this, the sorority that had finally accepted her.  I think we all felt that way -- like we had found our sisters.
Posted by Natalie at 7:38 PM 1 comment:

I'll be leaving for this year's Babalon Rising festival in just two scant days.  This is the seventh year of the festival.  As a founder, I feel odd that seven years has went by so quickly.  This is the second year that I will not be playing a role in the Feast of the Beast ritual, which was my decision.  This year we have asked all of the representatives of Babalon from previous years to participate, and even though I was Babalon in year one, I just wasn't feeling it this year.  Babalon is a Goddess of sacrifice, and I've given a lot in her service.  I even wrote this year's Feast of the Beast ritual, with some input from friends and fellow devotees of the Mother of Abominations.

Serving Babalon in the capacity of a festival founder and coordinator has been a great honor and a constant learning experience for me.  She really does demand every last drop of what we have to give, and what we give is transformed and returned to us from her Grail in ways we could not imagine.

I thought this might be a good chance to direct my followers to some of my older posts, all of them my own poetic meditations on Babalon.

If you are planning on going to the festival this year, stop by the Black Market vending booth and say hello.  I'll be there offering Tarot readings, wares from Blade and Broom Botanica, and friendly advice for those who aren't sure what to make of a Thelemic/Voodoo/Chaos Magic/Sex Magic festival.
Posted by Natalie at 6:12 PM No comments: