Response was positive for my carol from earlier this month, so I thought I'd try my hand at another one. A special shout out to Cerridwen is in this song, as a Solstice gift to my sweet soul-sister Lily Savage.

A Joyful Winter Solstice
the Sun is born again
from the sacred cauldron-womb
of mother Cerridwen.

His fire shines on gilded pines
Oh, hear the ancients sing
of tidings of magic and joy.
Magic and joy!

The world was cold and darkened
the Sun had gone away
but now He has returned to us
on blessed Solstice day.

To light our hearts and warm our souls
Oh, hear the ancients sing
of tidings of magic and joy.
Magic and joy! 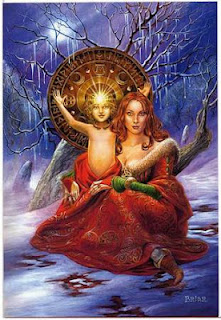 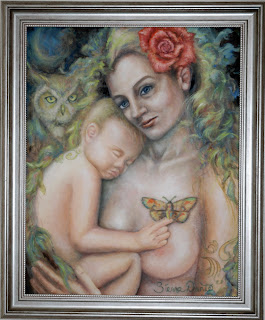 Thoughts on a Maxim

Know thyself! A maxim as pernicious as it is ugly. Whoever observes himself arrests his own development. A caterpillar who wanted to know itself well would never become a butterfly. ~Andre Gide

"Know thyself" is the most common translation of (arguably) the most famous of the Delphic Maxims. The Delphic Maxims are inscribed at Apollo's Temple in Delphi and are said to have been delivered by Apollo Himself. The Maxims are suggestions for pious living rather than commandments. According to legend, they were written down by The Seven Sages who are usually identified as: Solon of Athens, Chilon of Sparta, Thales of Miletus, Bias of Priene, Cleobulus of Lindos, Pittacus of Mitylene and Periander of Corinth.

Now, I've had trouble reconciling myself to some of the maxims in the past, but this was not one of them. When a friend posted the Gide quote above earlier this week it forced me to question a concept that I had not even realized I had accepted without question.

I will readily admit that choosing to investigate my thoughts on this subject seem to support the very foundations of the maxim "Know Thyself", but I'll leave that paradox aside here for the sake of further exploration.

Would a caterpillar who wanted to know itself never become a butterfly? Does it do harm to the development of my butterfly/psyche to hold it under constant scrutiny? I can understand how that could be perceived as the case. My illness, bipolar disorder, thrives on the constant narration and criticism of my mind about my daily activities. I achieve a certain state of grace when I meditate singularly on my breath and not on the chatter and self-talk of my mind.

Perhaps in chastising "Know Thyself" Gide was recalling that old adage about not staring too long into the abyss lest it stare back into you. We observe ourselves, and observe ourselves observing ourselves. We see flaws that mirror back at us like the abyss, like the demons of the Goetia. We see strengths that we hold ourselves up by. We create an identity based not on who we are being, but on what we are perceiving ourselves to be.

It is important to note that "Know Thyself", although a popular translation, is only that, a translation. The maxim itself is Σαυτον ισθι which can also be translated as "Be Yourself", the advice given to us by our mothers and countless characters on Sesame Street. "Be Yourself" is a much kinder way to live than "Know Thyself". It challenges us to discover our True Will, to ultimately become whatever sort of butterfly we are intended to be.

Therefore, damned for a dog be "Know Thyself". There is no law beyond Do What Thou Wilt. Be Yourself. Love is the Law, Love Under Will.
Posted by Natalie at 12:44 AM 9 comments:

We've been listening to holiday music this week at work. I find it soothing, uplifting, inspiring... but it also causes me a bit of melancholy. I want Pagan songs for what I feel is a very strongly Pagan holiday. Shades of Paganism live in carols like "The Holly and the Ivy" and "Deck the Halls", but what about the miracle of Solstice? Isn't Solstice the real reason for the season?

With that in mind, I listened admiringly to the sweeping carol "O Holy Night". It is a beautiful, grand, and celebratory song of praise and wonder. I felt, well... jealous. And then something wonderful came over me, whole and pleasing. The muse brought me this filk of that carol today, and now I share it with you.


O Solstice Night
(to the tune of O Holy Night)

O Solstice night,
The stars are brightly shining.
It is the night of the Sun God's rebirth.

Long lay the world,
In cold and darkness pining,
Till He was born and His light warmed the Earth.

O thrill of hope!
The weary world rejoices,
For yonder breaks a new and glorious morn. 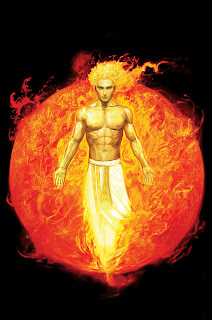