June has been a rewarding but exhausting month. I've been ill twice, and now that I am well I find myself combating a bout of depression. Meh.

For the fifth year in a row I've helped put on the Babalon Rising Festival, and, as always, I come away from it not know what to say about it. The event is excellent, even if I am blowing by own trumpet, and it gets bigger and more powerful every year. Babalon Rising is a festival primarily for Thelemites, although we have a large NeoPagan and New Orleans Voodoo component. The festival itself is designed to be a continuous four-day ritual, with its climax on Saturday night during an event we've named The Feast of the Beast. We've been working the festival annually as a trip up the Tree of Life, which made this our Tiphereth year. Accordingly, the sun came out in full force, and I spent much of the event with heat exhaustion. Good things prevailed, however. I assisted in facilitating a Qadishti sacred touch event, and served as one of the multiple women who invoked Babalon during the climatic ritual. I helped run, and eventually took over, our annual Kabbalah Bar event, which involves providing sepherotic themed body shots off of a living Tree of Life. The gifted and delightful Louis Martine led a wonderful ritual to help clear the Gulf of oil. I don't think I've ever heard a better drum circle than we had Saturday night.

I love Babalon Rising, but it is like my child who has grown and moved on to things I never knew it could be. I consider myself lucky to be its parent, and ready to support it in whatever way it needs me each year. But it does not nurture me. The magic it represents is in a place that I like to visit sometimes, but I do not live there anymore. I've become more solitary, and maybe even a little jaded in my own approach to magic. I'll always be a witch at heart, but I'm in a place right now where serving the Gods interests me far more than rituals, potions, and pretty magic. My sense of wonder rests firmly with the Gods these days, and less and less with my own Will or ego. This has less to do with personal growth, I think, than with sheer exhaustion. I am no longer the Mage in her circle commanding the universe to bend. I am trying harder to bend with the universe.

I helped Laurelei with an Aphrodisia ritual during the festival, and it was lovely. I find much that is beautiful and comforting to my spirit in Greek ritual and myth. I was the hydrophoros for the pompe, carrying my beloved Goddess amphora. Laurelei established a stunning shrine to Aphrodite on the Our Haven grounds and we held the ritual there.

The Arrephoria happened in June. It is one of Athena's most important festivals, and is usually a big deal in our household as it combines mysteries of both Athena and Aphrodite. Alas, I was very ill during the Arrephoria, and did little more than burn some incense in tribute this year. Athena understands my lack of observance, of course, but I've been internally berating myself over it all month. The whole truth is that I've been internally berating myself about everything this month. I've entered a depression, which is a classic and expected component of my being Bipolar I. My medicines do an excellent job of keeping me in a sane and acceptable middle range of mood and productivity, but even they cannot keep me from dipping a little low or flying a little too high ever now and again.

Depression for me is a lack of creative flow, a general sense of impending dread, and an urge to sleep around eighteen hours a day. You can see why I haven't blogged much this month. I haven't touched my manuscript either, nor my paints, nor yarn. Athena is understanding. Look at the famous relief "Athena Mourning" and you can see that sometimes her heart hangs heavy as well. 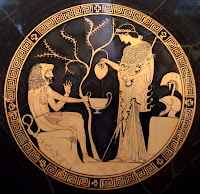 I've been looking forward to Plynteria for weeks!

Plynteria, along with Kallynteria, are Athenian festivals of purification associated with Athena. The Kallynteria was celebrated on Thargelion 25, which is June 6-7. Kallynteria is the "festival of sweeping". It was a thorough cleaning of Athena's temple by women under the direction of Athena's priestess. The priestess also refills and relights Athena’s eternal flame in the temple. Kallynteria is an excellent day to refresh your Athena shrine or just erect one.

Kallynteria is followed by Plynteria, the "festival of washing". During Plynteria the cult icon of Athena was divested of its peplos and veiled. The icon was then carried by women in a pompe to the ocean where it was ritually bathed. The pompe was led by a woman carrying a basket of figs. Two girls, the Loutride, or bathers, washed the icon in salt water. In the evening the icon was returned to the temple in a torchlight procession and was re-clothed in her peplos. Only the Loutrides and the women who dress and undress the Goddess are permitted to see Her naked.

The ancient statue of Athena Polis at Athens was of human size or less, carved of olive wood, and probably showed the Goddess seated without weapons. She wore a tall, golden stephane (crown) and She may have had a Gorgoneion (Medusa head) on her breast.

Plynteria was a time that was considered apophras, or unfortunate, because the icon of Athena Polis was not guarding the city.

Tomorrow I'll be veiling my own icon of Athena and escorting her down to the pond where I will ritually bathe Her. After the bathing I will clean and rearrange my shrine to Her, light an oil lamp to symbolize Her eternal flame, and return the icon to its place on the shrine.

Kali Plynteria!
Posted by Natalie at 11:59 PM No comments: