I was going to blog about Ophiuchus and the sheer level of insanity that surrounded its mention in the Minneapolis Star (not to mention its associations with Athena!) but I'll get around to that eventually.

In the meantime, here is a MEME. 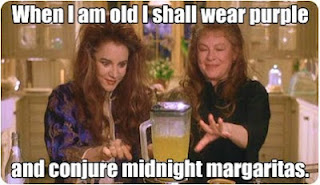 Do you have a magical/Pagan name?

Yes. I have a name I use in Circle and in the Ordo Templi Orientis, and I have a handle I use in the blogging and Hellenic Recon community, such as it is. My witchy name is Noctua. My online name is Glaux. I also have another name I use for Spiral Castle and Shamanic work, but that one is my secret.

How did you find Paganism?

When I was very young I read mythology, folklore, paranormal, and cryptozoology books almost exclusively. (Okay, so that and the Bunnicula series) I formed a natural belief in the Gods of mythology, and prayed to them regularly. In later childhood I found out about modern Witchcraft. My first two introductory tomes were Sybil Leek's Diary of a Witch and Paul Huson's Mastering Witchcraft. These two books would flavor my taste for Traditional Craft throughout my spiritual journey, although I had no idea there was any such thing as "Traditional Witchcraft" at the time. When I was old enough to wander the Mall's bookstore on my own (14? 15?) I bought Buckland's Big Blue Book of Witchcraft. After that I was struck with hormonal madness and proceeded to purchase only books with the term "Wicca" on the cover. (Gerina Dunwitch! Scott Cunningham!) I somehow avoided $RW and D.J. Conway's work.

So, um, short answer... I was a bookworm and Paganism found me.

How long have you been practicing?

I've tried to pinpoint the year for a long time. It was sometime in the mid 80's that I started identifying as a Pagan, and the early 90's when I began practicing something resembling Witchcraft. 20 years is a fair estimate.

Are you out of the broom closet?

Sometimes yes, sometimes no. I'm selective about who I divulge my proclivities to.

What is your path?

Humm. My path might best be described as schizophrenic.

What’s your brand of deism?

Who is your patron God?

I haven't dedicated myself to a particular male Diety, but I have a deep and abiding fondness for Dionysus and Tubal Cain.

Who is your patron Goddess?

Athena. I also work heavily with Lilith, Ereshkegal, Sophia, Babalon, the Stregan Diana, the Black Goddess of the 1734 Tradition, and the White Goddess of Robert Graves's work.

What Gods do you worship?

Do you fear darkly aspected Gods/Goddesses, or rather respect them?

I respect them and fear them no more than I do any other face of Deity.

Do you worship the Christian God?

No I don't. I personally find Jehovah offensive in the extreme. His son Jesus was a groovy guy, but is just another face of the dying-resurrecting sun king. The Holy Spirit as Sophia I do honor, both internally and externally. However, I think that few Christians are willing to think of God as female wisdom.

Do you worship animals? Or plants?

Yes, I pour libations to nature spirits, and work heavily with my magical fetch and the greater concept of the "Prime" owl spirit.

Do you regularly commune with nature?

Taken a camping trip just to talk to nature?

Hah! How about if I bought myself a cabin in the woods just so I could go on nature retreats? 'Cause I did.

Describe the moment you felt closest to Mother Earth?

The moment of now is as good as any.

Do you have a familiar?

I have two pet cats that both enjoy participating in magic and in moving energy. I don't think of them as "Familiars" in the traditional sense. I have an etheric fetch that I use for shamanic work, and this I think of as my Familiar.

Have you ever called upon the powers of an animal in ritual?

Of course. Surely you have heard of "Raising the Grove"?

Do you hug trees?

Yes. Sometimes they hug back.

What are your favorite plants to work with?

I love rue and lavender, but under very different circumstances.

What are your favorite trees to work with?

Sassafras is my magical tree of choice. I also have a willow wand and a folkloric fascination with Blackthorn.


What is your favorite holiday?

How could I choose? The Athenian festival of the Arrephoria is a big deal in our house, what with Laurelei's devotion to Aphrodite and mine to Athena. I also love Yule and Samhain.

What is your least favorite holiday?

Although it's hard to dislike a holiday, Mabon comes pretty close. I mean, I'm older than the origins of that holiday, you know?

Have you ever held a ritual on a holiday?

Ever taken a day off work to celebrate a Pagan holiday?

Yup. Typically Beltane. I take off for the Our Haven festival.

Do you celebrate Yule on the 21st rather than the 25th?

I celebrate a "Yule Season", something I commonly do with most Pagan holidays.

Have you ever felt the veil thin?

Ever danced the Maypole?

Know what the Maypole symbolizes?

How do you usually celebrate the Pagan holidays?

That really depends on the holiday, now doesn't it?


Do you use Tarot?

Do you use runes?

Do you use a pendulum?

Do you use dowsing rods?

Do you use astrology?

Any other forms of divination?


What was the first spell you did?

What was the latest?

Perhaps you have forgotten the magical adage: to know, to will, to dare, to KEEP SILENT?

Ever done a love spell?

Love? No. Lust? You bet your dove's blood ink I have.

What was the most powerful spell you’ve ever performed?

It's an ongoing spell that I like to call Babalon Rising.

What deities do you usually call on?

Sorry, I don't spell and tell.


Do you believe in vampires?

No. I think. Maybe Michael Hutchence. Maybe. But, really, no.

Are we talking Jacob-from-Twilight full-transformation weres, or otherkin totemic aspecting, or medieval wolf shamanic cults? Because, um, NO, sometimes, and yes, in that order.

See above. There's a world of difference between the witch who chants "I will go into a hare..." and the one that thinks "OMGZ! I r totally a demon-vampire-dragon-tiger! Watch me SHIIIIIFT!"

Okay, again, there are nature spirits that descendants of Pre-Indo-European cultures would identify as "Elves", and then there are those people who have watched Lord of the Rings too many times.

Ditto. There may be dragon energy in the land, but if you tell me you're actually a dragon (and usually not just any dragon, but, you know, the prince of dragons in dragonland, and primary defender of all that is dragonish) and you don't have some very compelling reasons for believing this (other than your life is soooo booor-ing) I will laugh at you behind your back. Maybe even to your face.

I have no experience with sprites, so I will say no.

Ever “seen” any of the above?

If I told you "yes" would you believe me? Okay. I've only ever seen a few ghosts, a gnome (weird story), and a possible Goetic demon, and I've done some pretty wacky things magically speaking. If you've seen a troop of fairies, or think your boyfriend is a vampire, or that there is a satyr in your backyard you need to lay off the hallucinogens.

Ever used any of the above in magic?

I honor our local nymphs. It's the Hellenic thing to do.

Do you have one of them as a personal guardian?

No. I'm more open to some of them as possible guardians than others (dragons/dragon-energy? Maybe. Vampires? As a guardian? You seriously need to STFU.)


Do you see a rabbit, a man or a woman in the moon?

A rabbit. I never could see the "man in the moon".

Owned by two of them.

When you meditate, what does your happy place look like?

I meditate with my drum, or with a mantra, or maybe a candle flame. My "happy place" is wherever I park my bum.

Do you work with chakras?

Yes. I enjoy Reiki and get a lot out of working with chakras.

Do you believe in past lives?

If so, describe a few briefly:

I don't remember anything about any particular past life, although I have had an interesting experience possibly related to one. I was at a festival where there was a folk musician singing authentic ballads from ancient times in their original language. He began to sing a song that I suddenly knew all of the words to. I sang the entire song along with him. He told me later that the song was a 13th century Italian love song, and was common among the peasantry at that time. Who knows?

Do you believe in soul mates?

Do you have a spirit guide?

Is it always love and light?

Is this a trick question?
Posted by Natalie at 11:25 PM 3 comments:

Email ThisBlogThis!Share to TwitterShare to FacebookShare to Pinterest
Labels: meme

Photos from the Nashville Parthenon

Laurelei & I just got back from a Caribbean cruise vacation, and on the way driving down to the port of Miami we decided to make a stop at the Nashville Parthenon. Here are some of the highlights. 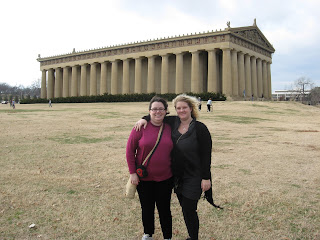 Laurelei & I outside of the Parthenon. 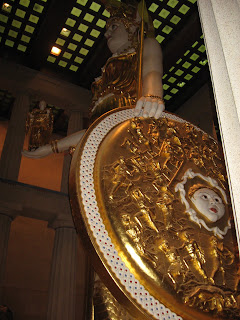 The glorious 40 foot statue of Athena Parthenos. To give an idea of size, that statue of Nike in her palm is six feet tall. 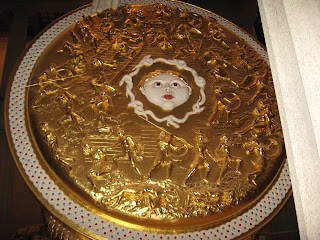 Detail of the shield. 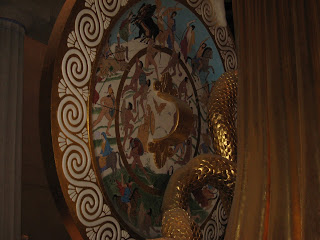 The interior of Athena's shield. Notice the figure of her near the handle, with her owl, overlooking Heracles. 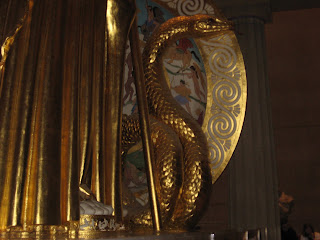 Erecthonious gazes from a safe place behind his step-mother's shield. 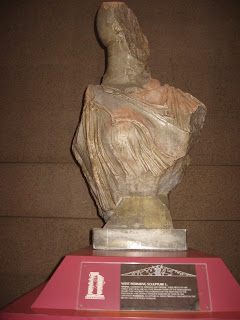 Replica of the western pediment Parthenon marble of Athena. 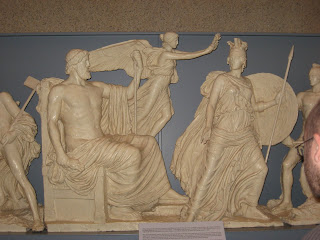 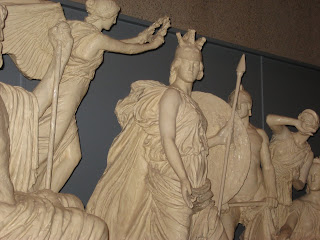 Detail of Nike and Athena. 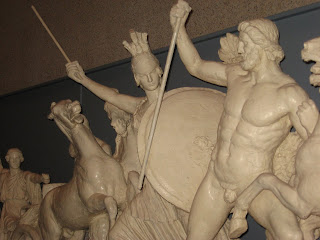 The entire vacation was stupendous. I will share more about it soon. Hail, Athena!
Posted by Natalie at 7:02 PM No comments: