Palmistry, or Chiromancy (pronounced "KYE-roe-man-see" and named after Leich de Hamong/Louis Hamon, the famous nineteenth century palmist who also went under the name of "Cheiro") is an ancient way of divining. It was common during medieval times and is known to have existed when Greece and Rome were at their height.  Your palm changes throughout your life. Although your hand gives an outline of your life, it is only a tentative outline. As with all divination, just because it is set in your hand, does not mean that it is set in stone. You can change your palm by changing your life.

Generally, the dominant hand -- the hand used for writing -- is the hand used during a palm reading. It marks a person's fortune as it exists on this plane. The passive hand represents events relating to the person's Great Work, or their fate. Before making any strong pronouncement about a person's life, check that the event is marked in both palms. If it exists only in the dominant hand, steps can be taken to prevent the occurrence. If it appears only in the passive hand, steps have already been taken to avert the issue. If a person is ambidextrous, use the right hand as dominant, and the left as passive. 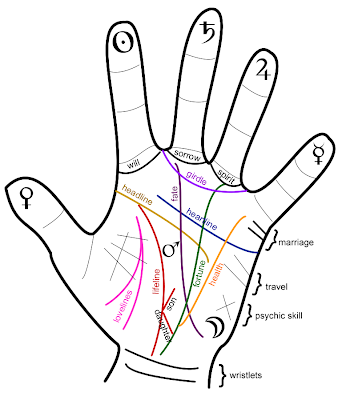 The lines are looked to as the major source of information in the palm. thick, deep, well-colored, unbroken lines represent positive qualities. Thin, broken, "chained" lines with weak circulation denote poor qualities. Networks of many lines in a hand -- like a spiderweb -- shows a person cautious about life, who is usually guarded. Strong, clear lines, with only major lines dominating the palm are the mark of a straightforward, boisterous person, comfortable with themself.

The Lifeline
The lifeline wraps itself around the base of the thumb, beginning near the headline, and ending near the wrist. The point where the lifeline separates from the headline shows the point of "breaking away" from the subject's birth family. If this section of the line is chained, the birth family was a source of strife. If the lifeline is completely separate from the heartline, it is a sign that the subject was not close to their family.

The lifeline is measured from the thumb-forefinger crease to the wrist. Early events are shown earlier in the line. Late life events will be closer to the wrist.

The strength and length of the lifeline show the health and longevity of the subject. a long lifeline reaching down to the wrist is the sign of a long life. A weak line shows poor health and constitution. A break in the lifeline should be examined in both palms, as this may be a sign of grave illness or sudden death. Lines reaching off of the middle of the lifeline either up or down may represent children, male and female, respectively.

The Headline and Heartline
The headline and heartline should always be examined together, as one may be more dominant in the palm than another. If the headline is dominant, it denotes a sensible, logical person, who may be a bit cold emotionally, and prone to obsession. If the heartline is dominant, it shows a sensitive, caring person, prone to emotional outbursts and heartache. If the two lines are in balance, the person has a healthy balance of their mental and emotional capacities.

The heartline is measured from the crease under the pinky finger to it's end near the finger-mounts. The heartline sometimes branches near the end of the line (this appears as a Y shape in the palm). This may be an early warning of mental illness in later life, or it may be a clue to the emotional nature of the subject. Examine which finger the "branch" reaches toward. The planetary nature of this finger shows the emotional issues that most occupy the subject.

The Line of Health
The line of health begins near the line of fortune, and reaches toward the pinky finger. A strong line of health shows great health and vigor, and also a natural charmer and great communicator. A weak, broken line of health often shows a sickly nature.

Rings
Rings appear to encircle the mount of each finger, just below the creases where the finger naturally bends.  A ring of the Sun indicates great strength of Will, with the drive and ability to influence others.  A ring of Saturn indicates sorrow and a tendency to desire what is beyond current means.  If the ring of Saturn cuts into the line of fate, this is doubly so, and the individual will send their life feeling as if the world owes them something.  A ring of Jupiter indicates a deeply spiritual person.  If this ring is present along with positive markings on the Mount of the Moon, this indicates an individual with great potential for occult study.

Children
Dramatically strong, yet short offshoots from the lifeline indicate children.  Lines of this nature pointing up towards the fingers indicate sons, and lines pointing down toward the wrist indicate daughters.  Birth order may be determined by moving down the lifeline towards the wrist.  These birthlines can also indicate the completion of a large life goal, or spiritual birthing, if the individual is childless.

The Lovelines
Running parallel to the lifeline on the mount of Venus are the lovelines. Each loveline shows a great romance in the subject's life. Often only one loveline will run nearly the entire course of the lifeline. This is the sign of one true love in life. The subject will meet the lover shown in relation to the loveline's appearance along the lifeline.

The Girdle of Venus
Stretching across the mounts of Saturn and Jupiter, the girdle of Venus is an indicator of a highly sensitive and intellectual nature; however, such sensitiveness renders the bearer moody, touchy, and easily offended. It is often seen in the hands of high-strung, suspicious, and anxious people.  If coupled with a fleshy mount of Venus, the girdle shows a highly sexual nature.

Shapes on the Palm

Grids
A grid occurs at a point of the palm where the energies that area dissipate. If a grid covers the entire palm, the power of its bearer is constantly drained by vexations and imagined slights. If a grid appears on a mount, it saps or thwarts the qualities of the mount.

Crosses
Crosses denote troubles, disappointment, danger, and when found on lines, the harm to the bearer may be aggravated. Occasionally it can refer to a dramatic change in one's life due to a crisis or hardship. A cross is only favorable when it is located between the head and heart lines, when it is referred to as the "Croix Mystique", and indicates a propensity towards mysticism, occultism, and superstition.

Stars
A star is a symbol of great and sudden brilliance in a person's life. This brilliance is often arbitrary and unexpected, and is always an event that the individual can exercise little control over. A line that ends in a star signifies the greatest accomplishments possible; however, the star often carries with it an unpleasant price. A star on the mounts will naturally denote great proficiency with the mount's corresponding traits, yet these traits may consume some of the other bearer's qualities.  A star in the palm indicates a need for Temperance in ones’ life.  These negative influences can be seen as being “star-crossed”.

Islands
The Island is always a negative sign. Unlike the star or the cross, the island is a gradual and prolonged, and often subtle period of strife in an individual's life. Because of the gradual nature of this malady, the bearer may not have even noticed that they are in a darker period of their life.  These misfortunes will last to the extent that the island is long.

Squares
The square is almost always a beneficent symbol. A square surrounding an ill-marked area signifies repair and eventual containment of the negative influences.  The one instance in which the square denotes negative influences is when it is found on the lifeline, where it indicates incarceration.

Circles
The circle is a very rare marking in chiromancy. It is an evil mark unless it is on a mount, in which case it usually augments the powers and promise of a mount. If it touches any line, it brings inescapable misfortune related to the line it touches.

Triangles
The triangle is nearly always a positive sign. It denotes success corresponding to the location of the mark. If found alongside a line, it will naturally take on significance dependent upon the line, marking a point at which accomplishment is achieved. The triangle will never reach the great heights of success that its cousin, the star, but it possesses balance and will not carry with it the backlash that so often accompanies the star.

Chains
The chain, like the island, is a negative sign.  Chains bind up the energy of the lines they occur on, and can be seen as islands linked together, presenting new obstacles arising from past negative influences.

Tridents
The trident is always a positive marking. If it arises from a line, it will increase the qualities of that line and draw additional power from the mounts or lines that the branches on either side point towards. If it is found on a mount, the trident increases the properties of that mount in conjunction with its neighboring mounts. The trident is such a powerful symbol that it eclipses the star in beneficence, as it has none of the ‘star-crossed’ energy related to that marking.
Posted by Natalie at 11:44 PM