After what feels like an eternity the Alejandro Amenábar film “Agora”, based on the story of Hypatia of Alexandria, is finally seeing a limited release in American theaters this weekend. Rachel Weisz, who won my undying affection in the role of Evelyn Carnahan the plucky librarian in The Mummy, plays the role of Hypatia.

Agora has had a difficult time of being shown in the U.S. as The Wild Hunt Blog details here.

Hypatia is my hero. It feels fitting to me that she would come to America for our Memorial Day celebration, as this is the holiday when we honor our fallen heroes. Hellenics take stock in hero worship, and in my heart there is no hero of myth, legend, or history that shines quite like Hypatia.

Hypatia was a scholar, a teacher, a Neoplatonist philosopher, and, yes, a librarian. Her brutal death at the hands of an angry Christian mob marks the end of Classical antiquity.

My response to the horror of Hypatia's martyrdom is as close as I have ever felt to the feeling certain Christians attribute to meditation on the Passion of Christ. Hypatia has her own stations of the cross...

There she rides on her chariot, proud to be an independent educated woman in a time of increasing oppression and superstition. Now the mob interrupts her congress. They pull her down. Her robes are torn from her body. Her head smashes against the stone street rock. They beat her. They tear at her flesh with shards of oyster shells. They burn the ragged remains of her broken corpse. Who does she cry out for? In all of her studies concerning the goodness and richness of humanity did she ever fear that fate held such a cruel end for her by the hands of her own kind? Does her heart weep for their ignorance?

My heart weeps. Hypatia was murdered as a sign to all women who dared to live proudly, who longed for wisdom and freedom. She was battered as if she herself were a pagan goddess, brought low by this dark and fearful new religion.

This memorial day I encourage you to find and honor your own heroes, ancient, modern, or mythical. Tell their stories, adorn their altars, pour to them offerings. Honor the place within you that cries out for peace.
Posted by Natalie at 1:14 AM 4 comments: 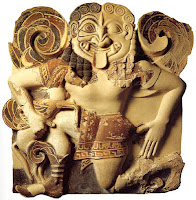 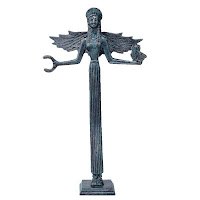 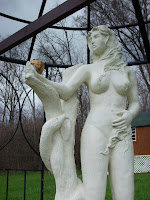 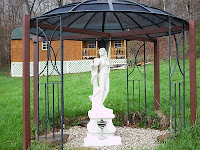 May has been a busy month for me. I started this month at the Our Haven annual Beltane festival, where I danced the maypole and frolicked in the mud.

Laurelei and I have big plans for plantings throughout the grounds this year. First there is the Aphrodite shrine which Laurelei blogged about here. It is located within a growing hedge labyrinth which we started several years ago. We also have plans for a Dionysus shrine within the labyrinth, complete with grape arbors and statuary.

At another shrine on the grounds, the White Goddess shrine, located in the orchard where our cabin sits, we are going to plant climbing blue roses and moonflowers up the four trellises supporting the dome. I've included some photos of the shrine in this post. You can see our beloved cabin in the background.

I've been hard at work on the website for this year's Women's Goddess Retreat. I gave the site a full redesign and I'm pretty pleased with it. We've submitted a proposal to the Our Haven elders planning a Women's circle on the site. We've plans to add many plantings to the circle if it gets approved. We are considering starting with fairy roses and wisteria. We'd like to add several "womanish" herbs and plants to the area like motherwort and cohosh.

Here at home we're adding some lavender to our herb garden and many veggies to our food garden: strawberries, tomatoes, peppers, and cukes.
Posted by Natalie at 6:28 PM No comments: